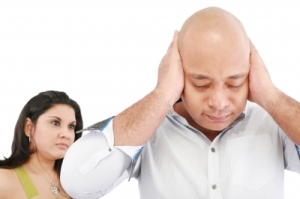 In this day and age, it’s quite unfortunate that you see so many women “dating down.”

But, what is dating down, you ask?

Dating down is when you date men that aren’t good for you or worthy of you.

Common Types of “Dating Down”

If you’re dating a man that doesn’t respect and cherish you and the value that you bring to the relationship, and instead, puts you down, cheats on you, abuses you or controls your every movement, then you’re dating down.

Do you have to fight for attention? Ask your man to call you? Or remind him that you exist?? You’re dating down.

Are you an ambitious, driven, well-educated woman dating a man who isn’t ambitious or driven to, for example, learn a trade/skill, pursue entrepreneurial endeavors, or pursue a higher education? Well, you’re dating down.

Are you supporting a man that isn’t self sufficient? Whether he’s “borrowing” your money or your car, face it, you’re dating down!

Problems With Dating Down

When you date down, you open yourself up to significant problems that you shouldn’t have to deal with.

These relationships negatively affect your self-esteem. You’ll probably start to think that this is what you deserve. That you’ll never find better.

You’ll eventually downplay your self-worth and, consequently, your self-confidence will dwindle as well.

When you’re treated poorly or stay in the wrong relationship, you’ll get desensitized to those things that you shouldn’t have to accept.

The chances of your next relationship being healthier or better is slim because you’ve gotten used to accepting less than what you need and deserve from a relationship. This easily turns into a cycle.

You may even falsely believe that it’s better to have this man than no man at all.

Dating down can lead you to resenting the man you’re dating because he’s not who you want him to be. But, truthfully, you can only blame yourself for choosing to date a man that wasn’t right for you in the first place.

If you’ve been dating down, you owe it to yourself to let that relationship go in order to attract a man who actually deserves you. A man who appreciates your worth, a man you don’t have to financially support, a man who has ambition.

Give yourself a chance to attract a man that is on your level. Someone who is self sufficient and can pay his own bills and maintain his own car.

You’ll never have a better relationship as long as you stay in the wrong one. So free yourself now, as hard as it may be, so that you can have true happiness in the future.

6 thoughts on “Dating Down”