Image courtesy of Adamr at FreeDigitalPhotos.net

I wrote a post called Red Flag: Does he pull disappearing acts? and I got some really great comments from people sharing their experiences with the dreadful “disappearing act.”

“If he’s just not into me, I get it. If he has other girls or a girlfriend, I can let him go. Whatever his reason for disappearing out of my life, I can deal with that. But it’s the constant REAPPEARING that I don’t understand. If you do not want to be with me then why not leave me alone? Why stop talking to me then try talking to me again? Is it about sex? Is this a power or control thing for him? Does this boost his self-esteem? What is his deal?”

I wanted to address this question in a post because many women have asked themselves these questions too.

It’s certainly shocking to a woman when she goes from regularly communicating with a man to not getting any replies from her texts or calls.

And as if going MIA wasn’t bad enough, some men choose to further perplex women by coming back into the picture like nothing happened.

Maybe he tells you he lost his phone or perhaps he went all out and said he was in the hospital. Regardless of the excuse (and they’re all just that, excuses), it’s never okay for a man to ignore your texts and calls for days or weeks.

If a man is genuinely interested in you, he’s not going to disappear off the face of the earth then pop back in your life a week or months later.

Image courtesy of StockImages at FreeDigitalPhotos.net

Why Do They Re-Appear?

Do men reappear in your life because of sex, power and control, or self-esteem? The answer truly depends on the man. There’s actually no one-size fits all answer to this.

The most important point to take away from this is that, if he really wants to be with you, he’s not going to disappear from your life for days or weeks, period.

But, if you decide to give a man another chance after his disappearing act, don’t be upset when he does it to you again down the line.

Whether it’s a break up or the disappearing act, many men will contact you again in the future. And, you can’t let your decision to date a man be based on whether he ever reaches out to you again.

If a man wasn’t right for you or he flat out disappeared on you, it shouldn’t matter that he reached out to you again. Don’t let a bad blast from the past set you back in your dating life.

For more great dating advice, check out my book: Picking up the Pieces: Rebuilding Yourself for the Love and Relationship You Deserve. 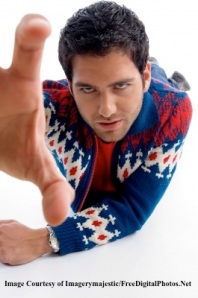 Ladies, how many times have you been dating a guy and while it seems it’s going well because you’re hearing from him everyday or every other day, all of a sudden he disappears and you hear nothing for days or a week?

Listen carefully ladies: Consistency is KEY!! Consistency lets you know that a man is who he is claiming himself to be.

A man’s words must align with his actions!

If a man makes promises that he doesn’t fulfill, or a man says he operates one way, but actually does something else, take this as a sign and red flag that this man is NOT who he claims himself to be.

Write The Script and He’ll Play The Part

Many men play “roles” for women. To be clearer, men play the part they think you want them to play in order to get what they want from you!

Why? Because you’ve let him know the role you wanted him to play. You fed him the lines for his character. Your ex didn’t do so and so, therefore, you want him to do or say these things.

Don’t Give Him A Character To Play

While many women see this kind of information sharing as just a way to share themselves and allow a man to get to know them and their past experiences, some men actually take these conversations as “you need to do this if you want to be with me.”

Don’t tell a man what your ex did that you disliked. Why?? So that you can see how this man will actually treat you on his own without prompting from you!

Stop feeding men the lines and roles that you want them to play and let them SHOW you who they will be with you.

Where Does This Come From?

Early on in my dating life, I picked up on the fact that men would try to mimic (not genuinely) the dating preferences I shared with them. This made me more cognizant of the past relationship experiences that I decided to share with new men I dated.

However, it wasn’t until I read the book, “Play or Be Played,” that I realized that this was all a kind of game. This book has great wisdom for women and you should read it at least twice!!!

And, I wasn’t paid or induced to endorse or promote this book. I just have genuine love for it!

While some of you may say, well isn’t it a good thing if he starts playing that role and doing the things your exes didn’t do?? WRONG!!!!

The Role Is Not A Man’s Genuine Self

In fact, a man will play this role, however, he can’t and won’t play this role forever. Most men will start showing their true colors around the 3 month mark. For some reason men can’t seem to keep an act alive for much longer than a few months.

But, it makes sense because its hard to act like a different person or maintain a facade for an extended period of time. This is why you will see a lot of women with 3 month rules, because they understand that you really see who a person is a few months after you’ve met them.

Now, the 3 month rule does run you the risk of having a man play that “role” more extensively in order to pass your 3 month test. So, if you decide to use the 3 month rule:

When a person shows you who they are, believe it! Stop trying to rationalize a man’s erratic or bad behavior, especially if he isn’t even trying to explain or apologize for his actions himself.

Bringing you back to my original point, if you normally hear from the man you are dating every day or every other day, but there are times that he disappears for days or even weeks at a time and you are unable to reach him, take this as a serious red flag and proceed with extreme caution because there may be a whole lot more to the picture that you don’t see!

Regardless of whether you can confirm that a man’s disappearing act is due to him being with other women or not, you have to evaluate whether this man is right for you based on his actions as a whole, based on the big picture.

To clarify, whether or not you know if this man is seeing other women or is just bad with his phone (rare these days) you have to ask yourself, do I want to be with a man that can disappear for days at a time without communicating or responding to my calls or texts??

Unfortunately, many women are so eager to have a man and/or get married that they are ready to seriously date or marry any man that comes into the picture.

However, we can’t be this lax! We have to evaluate EVERY man individually to determine whether this is the kind of man that we really want to be with and who is actually good for us!

This is what you need to ask yourself to determine whether to proceed!

Stop taking any man as they come and start taking control of your dating life. If you pull back from men that exhibit serious red flags, you’ll save yourself a whole lot of heartache and months of recuperating!

Oddly enough, many women are happy to be in relationships that they KNOW aren’t going anywhere. But, wait, there is something they don’t realize.

By being in an unnecessary relationship, women will take on emotional baggage from this relationship and it could become harder to maintain healthy dating habits in the future.

To put it simpler, by being in an unnecessary or bad relationship, you’ll probably have attitude or negative feelings towards the next several men you encounter and, therefore, someone who may have been a great match for you may be put off by your negative attitude or pessimistic conversations that are really just a result of the trials and tribulations from your previous relationship, which you had no business being in!

Just some food for thought! Start paying attention to red flags because when someone shows you who they are, there is no rationalizing you can do to change them.

Be kind to your body and mind, don’t rack your brain trying to make excuses for a man. If you find yourself doing this, it may be time to move on!

If you’ve been a victim of the disappearing act, I want to hear your story or your thoughts! BUT, remember ladies, after the third time of having a man pull the disappearing act on you, you’re no longer a victim. Instead, you’re a willing participant!

Fool me once, shame on you, but fool me twice and it’s shame on me!!

If you have any thoughts on the “disappearing act,” please leave your comments below, I love hearing your perspective!

For more great dating advice, check out my book: Picking up the Pieces: Rebuilding Yourself for the Love and Relationship You Deserve